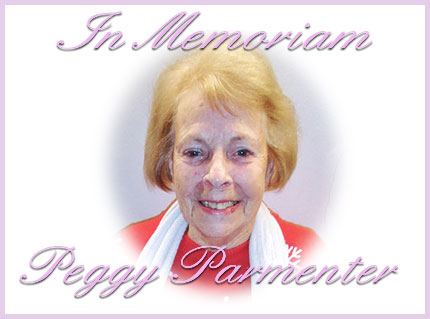 Sadly, Peggy Parmenter passed away on 11th February 2021.  Peggy had slowed down a lot over recent years, not surprising when you consider her age.  During the last year or so she had increasing health problems that left her pretty much immobile.  Her husband Ron, whom she dearly loved, cared for at home but as her health deteriorated, she had more hospital visits than she would have cared for.  Just a few days before she passed away she was once more hospitalised, where she later died.  Peggy and Ron had been married for over 63 years and he will miss her terribly. Our thoughts go out to him and the family at this sad time.

Peggy was one of those ‘get up and go’ girls.  She had no time to sit around and had to be on the go, constantly doing something.  She would insist that she could manage, even when things were becoming impossible for her to continue with.  She was ‘in charge’.  In charge of serving others, a wonderful gift to have; whether teas or coffees, savouries, cakes or puddings whenever there was a social event or a day of filming she would organise the food, delighting others with her homemade fare.

For shows, where OVFM catered for visitors, she went the extra mile to make special treats, filling her freezer up to the gunnels.  One such occasion that she catered for was the North v South competition that OVFM used to host. She would have likeminded volunteers lined up to help out both with the home made cooking and the service on the day.

Peggy enjoyed talking to people, socialising and having fun and you’d know that she was about, due to her distinctive voice and little chuckle.  She possessed a natural talent for acting.  She learned her lines so that her words would flow naturally and seamlessly as though in conversation, entering fully into the spirit of the character she was playing………  And if there was a reason to ‘dress up’ Peggy would oblige.

OVFM were very fortunate to have such a versatile member amongst their ranks.  It is good that we are left with so many good memories of Peggy as we see her starring in many of the older films within our archives.

Peggy, we will miss you, may you rest in peace.

5 comments on In Memoriam – Peggy Parmenter