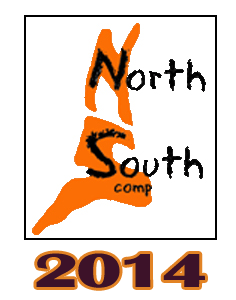 An audience of 62 people represented by 12 different clubs turned up at Farnborough Village Hall for the 2014 North v South Grand Final.

We were especially pleased to welcome members from Sutton Coldfield Movie Makers and Lowestoft Movie Makers who made the several hours journey to be with us. Also present was Romy Van Kreiken from Holland, a familiar face at IAC events.

An entertaining programme of 25 films were shown with a good mix of genres including Drama, Documentary, Comedy, Animation and One-Minute entries.

Our judges for the Final were Peter and Mary Rouillard from Guernsey who kindly stepped in at the last minute. The standard of entries was high this year and they had a difficult task in choosing a winner.

As usual, we ran our popular Audience Vote competition where they were asked to match the judge’s decision. Although the judges were asked to put the top 10 films in order of merit we asked the audience to only match the top 3, to give them a fighting chance. Nobody managed to do that but the person who got closest to the judge’s decision was Derek Hopcroft of Tonbridge Film Makers.

Here then are the results:-

Congratulations to Altrincham Moviemakers for winning the John Wright Trophy and to Sutton Coldfield Movie Makers for winning the Harry Adams Trophy as runners-up. This being the 40th Anniversary of the competition, brings the total number of wins to 21 for the North and 19 for the South.

May I thank all the clubs who entered and attended for their support. We hope to see you again next year when the competition will be held on Sunday 6th December.