This years event was tinged with sadness as we remembered Mike Coad, the Orpington Video and Film Makers member and keen champion and organizer of the North v South Competition in the south. His sudden and unexpected death left us shocked and floundering in the run up to the Grand Final as he had always taken complete control of the organization and arrangements. However OVFM and friends rallied round and with the assistance of Jo, his beloved wife, we were able to assemble the pieces of the puzzle and go ahead with the event. Throughout the process Jo showed amazing courage as she not only coped with grief and the practicalities of arranging the funeral but helped us along every step of the way. She, as the rest of us, was determined to make the event one that Mike would have been proud of. 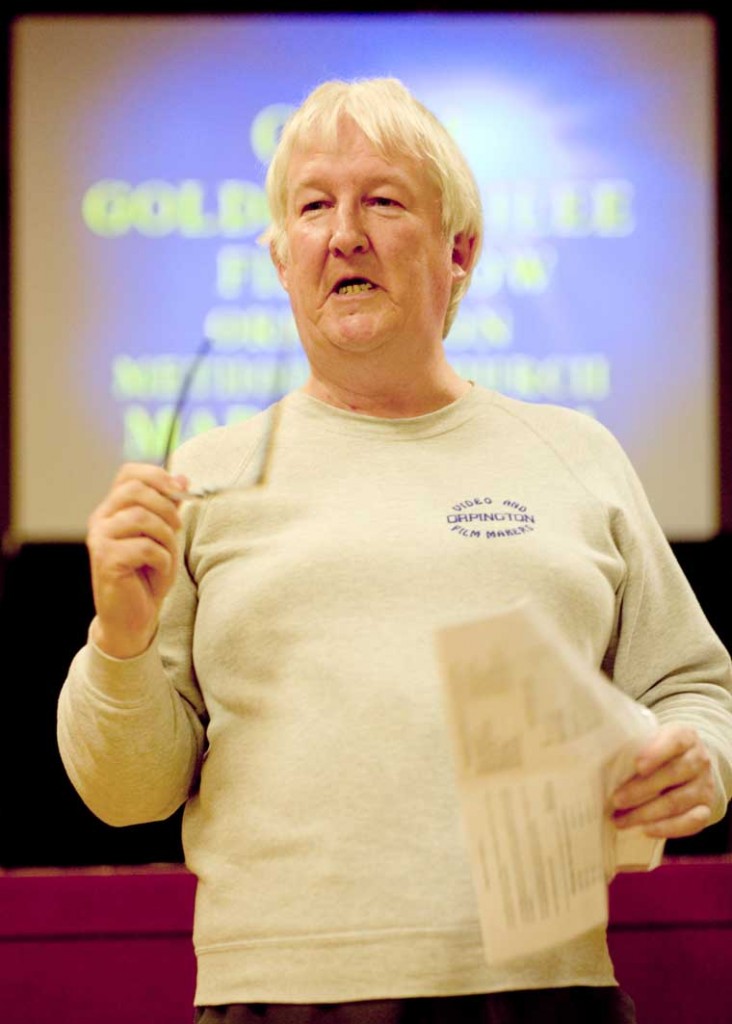 With an audience of nearly seventy and with representatives from clubs all around the south the atmosphere in the cosy village hall was warm, friendly and filled with anticipation! Every effort was made to follow Mike Coad’s format and as was his custom we showed all of the twenty-one films entered into the competition. A consequence of this was the three hours plus of screening time alone! But the great variety of films shown and the sheer quality of many of them meant that the time flew by as the audience enjoyed a feast of entertainment.

With a break at half time for refreshments the buzz in the hall was one of genuine excitement at the prospect of who would take this year’s winners’ trophy. Throughout the event Mike Coad’s presence was palpable and also physical as Jo, his wife, had framed a wonderful photograph of him that she had titled ‘King Of North v South’, and which was put in pride of place beside the screen.

Keeping with Mike’s own strict procedure only one or two people knew the results until they were announced by the m/c OVFM vice-chairman Sam Brown at the very end. There was a hint of disappointment that the North had won the John Wright Trophy again but a general feeling amongst the audience that ‘Energy Crisis’ by Chesterfield Film Makers was a fine and worthy winner. Great pride in the south and especially the Sutton Coldfield Movie Makers’ camp that two of their films (‘The Letter’ and ‘The Shout’) were joint winners of the Harry Adams Trophy, representatives of the club were delighted to be presented the trophy by Jo Coad.

Special thanks to Andy Watson, projectionist, Peggy Parmenter & team (including Jo Coad) for the refreshments, Ron Parmenter doorman, Sam Brown master of ceremonies, Freddy Beard, liaison and communication, Brenda Wheatley raffle, Ian Menage for sorting out the digital copies, Tony Johnson southern heat judge (at very short notice!), everyone who pulled together to make the event the success it was, and all the clubs who supported the competition by entering films and by attending the event.

Congratulations to Sutton Coldfield Movie Makers for doing so well for the South by picking up the Harry Adams Trophy for runner-up. Also well done to Bob Vine for getting into the top ten with ‘Broken’.

Next year’s theme is ‘Out of the blue’. However the future is uncertain as we have no one yet to organize the competition in the south. Step forward if it’s something YOU could take on!