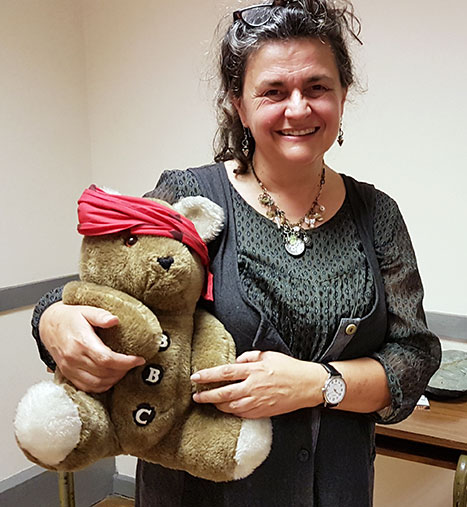 When Hugh first told me that Christine Green was an incredible speaker and her subject was fascinating, I didn’t believe that she would be that good.  Was I in for a surprise.  Wow, what a presentation.

With a packed house, including 8 or so from Spring Park, she painted a picture of her background.  She is the daughter of graphic designer parents and he wider family has photographers, painters, printmakers, wedding photographer and so at an early age she decided she wanted to join the BBC and be creative.  She thought every house had a Rostrum Camera sitting on the landing, like the one her father used, as she described in detail HERE.

And so Christine joined the BBC and began designing and creating amazing title sequences which words alone cannot describe.

To see one her most amazing title sequences search Our Friends in The North.’ To have the vision to dissect a picture of four faces in this way, using unusual shapes with bevelled edges, then introducing other pictures coming through in the background all being held together with an appropriate soundtrack. was beyond my comprehension.

Christine covered four or five tables with props, images, pamphlets, art work, needle stitching, lettering etc.  Hugh was busy ‘snapping’ away so the next Viewfinder will give those who missed this event some idea of her talent.  Many took the opportunity to ask her questioned during the break. The practicalities of animating her work before there was access to the digital processes we know today, was a huge operation often with equipment specially designed and built for that particular title sequence with many operators to make the effect possible.

Christine also handstitched the BBC buttons onto the original 27 Pudsey Bears and here she is with her original Pudsey (see above photo).

The evening flew by and we could have stayed beyond midnight and still want more.  So a very special thanks to a very special and talented Christine Green and thanks to Hugh for ‘talent spotting’ her and inviting her along.