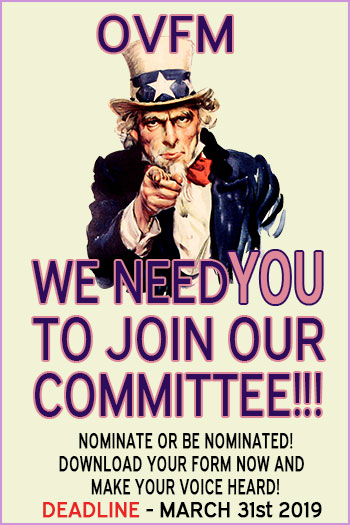 Every club member no doubt has an opinion or idea as to how we could improve the club’s running, its fortunes, or has suggestions for projects, promotional ideas or other club related activities. The AGM is one way for people to put their ideas and opinions forward or, of course, committee members are always willing to listen and put these proposals to the other committee members during the bi-monthly meetings for discussion.

At the most recent committee meeting, two members announced their intentions to step down from their posts – our club President Reg Lancaster and Vice Chairman Sam Brown. We are sad to see them go but do thank them for their years of hard work and contributions in helping keep OVFM running.

We are also in need of a new club secretary as the work previously done by the dearly missed Freddie Beard is currently shared between many of very busy committee members. This is arguably the most vital role to the club outside of the Chairman, and whilst Freddie will be a hard act to follow, we do hope that someone will be able to step up and make the role their own, just as Freddie did.

Therefore this year’s AGM on April 4th will see the election of two new committee members in senior posts and possible ordinary members if anyone wishes to step up. To participate, simply fill in the form you received with the March edition of the Viewfinder or download it from HERE then find another club member to nominate you and get that nomination seconded by someone else. Submit your form to Andy Watson by no later than Friday March 31st ahead of the AGM on April 2nd where the final results will be revealed.

As you can see it is important that this year we do see a concerted interest from club members to step up and be counted.

On behalf of the club we thank  and  for their tireless efforts and contributions to the running of OVFM.

3 Replies to “THE OVFM COMMITTEE ELECTIONS 2019”