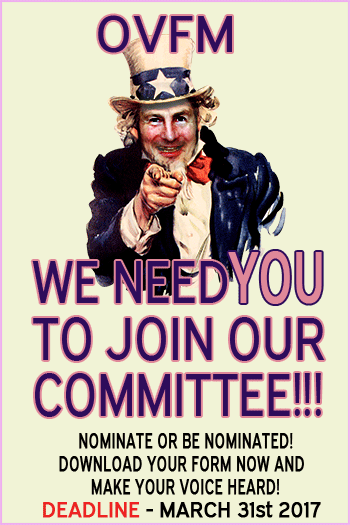 At the most recent committee meeting two members announced their intentions to step down from their posts, those being Competitions officer Brenda Wheatly and OVFM Chairman Simon Earwicker. We are also in need of a Press Officer to help promote the club and its events to the local media and beyond. This doesn’t have to be a committee member so anyone is welcome to apply for this role.

Therefore this year’s AGM on April 4th will see the election of two new committee members in senior posts and possible ordinary members if anyone wishes to step up. To participate, simply fill in the form you received with the March edition of the Viewfinder or download it from HERE then find another club member to nominate you and get that nomination seconded by someone else. Submit your form to Freddy Beard by no later than Friday March 31st ahead of the AGM on the 4th where the final results will be revealed.

As you can see it is important that this year we do see a concerted interest from club members to step up and be counted, now that two vital roles are vacant. While we have a nominee for Chairman, further nominations or volunteers for a new Competitions Officer, as well as a Press Officer are very much welcomed.

On behalf of the club we thank Simon and Brenda for their tireless efforts and contributions to the running of OVFM.

2 Replies to “THE OVFM COMMITTEE ELECTIONS 2017”