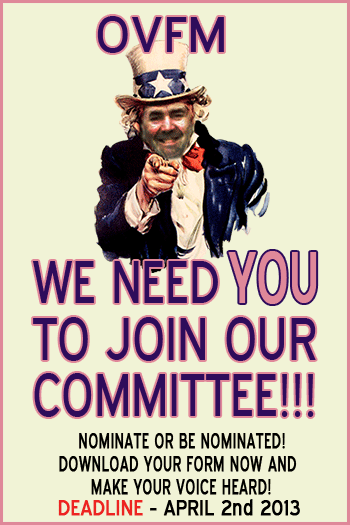 Earlier the Committee was referred to as “a select few” but this seems to have caused some confusion for some members about how exactly the Committee is “selected”. Like all great organisations in the free world, OVFM is as much a democracy as anyone else, thus the Committee are voted in exactly as one would a Government or Board of Directors. This takes place at every AGM, although some intermediary appointments have been made for various reasons (most recently being the sad passing of our Vice Chairman) but to be considered a member of the Committee one has to stand up and be counted.

Every year prior to the AGM a form is made available to club members – either with the Viewfinder or (from now on) here on the website – with which the Committee members are voted in by YOU. ALL incumbent members are asked if they are willing to stand for re-election leaving every seat and position open – from chairman to treasurer to ordinary member – until the nominations and votes have been received. It seems over the past few years that the lack of response from OVFM club members has meant the Committee has remained largely the same. With nobody new standing for election the same committee members have automatically remained in place. This has caused some feeling among club members that the Committee is an autonomous collective who decide to retain their own positions on an annual basis.

Therefore this year’s AGM on April 16th will hopefully assuage those concerns and lay them to rest once and for all as two members of the current Committee are standing down from their positions with one not seeking re-election for their position. So, if you want to make a difference to OVFM and have ideas or concerns you want to raise, then now is the chance to make yourself known and join the Committee!

Simply download the form from the Viewfinder or from HERE then find another club member to nominate you and get that nomination seconded by someone else. Submit your form in by the next club meeting on April 2nd ahead of the AGM on the 16th where the final results will be revealed.

Standing down and thus NOT seeking re-election is:

As you can see it is important that this year we do see a concerted interest from club members to step up and be counted, now that two vital roles are vacant. While we have a nominee for Chairman we will be needing a new Press Officer.

If you have any queries or comments please reply to this post below and we’ll do our best to respond to them for you.

On behalf of the Committee, thanks for reading and for your continued support of OVFM