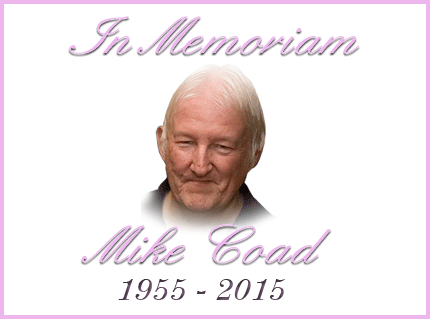 I was stunned at news of the passing of our dear friend and club-mate Mike Coad. He was one of that rare breed, a quiet man.

He was a chairman’s dream in that while he didn’t make a lot of noise, when Mike agreed to take on a task, you’d get a complete package, everything wrapped up, delivered on time, all potential problems foreseen and dealt with. Job done, efficiently. The real deal.

Some years ago, the IAC Council’s office was sinking under a sea of paperwork going back to the early 30’s and it was suggested that Mike take a look. All went quiet and then to general surprise Mike and Jo presented the first half of a new history of the Institute that exceeded all expectations. They went on to complete the whole task in a surprisingly short time.

It was the same about ten years ago,  when the North v South competition  ran into difficulties. Mike stepped in and has run it ever since. That was the Coad way. Quiet, solid performance. We are all in his debt.

I doubt anyone in our hobby has visited more film or video clubs than the Coads. They seem to have been everywhere.  When Annabelle and I started to go “out” to the likes of the Kent Festival and SERIAC events they were often there. When we went up North, people would ask for news of them. When I discovered they lived at Sevenoaks, it was only natural to approach him. He was a lone worker at the time but when he changed his job he came on board and Jo joined not long after.

That was in OCS days when celluloid was king and Mike, in addition to making films, was an avid attender at film fairs, where fans and collectors got together to watch  and trade Super 8 versions of film classics. Mike and Jo gave several Nights at the Flicks, using their collection. There’d be a Cartoon, a Newsreel, Trailers and a main Feature. Mike introduced and projected, while Jo served popcorn and/or ice cream at the interval.

When video arrived, trust me, the image quality was lousy. Mike and I thought so and while I buckled, the Coad stable was the last active film “unit” to convert to the new medium. You could say that our “OVFM” title came about because they were still making their special brand of movies on crisp quality Super 8, when we needed  to get “video” into our club name.

Mike and Jo have been among the most prolific filmmakers in the last 30 years, and we teased them about having a secret vault full of fascinating facts about familiar places. Mike even threatened to write a “Scintillating Sevenoaks” scenario but instead, he whisked Jo off to beautiful Bexhill and made their recent films down there!

Mike was a commodity trader when younger, gave it up and had a variety of jobs and interests. A born trader, he was an eBay expert before most of us even had a computer. He was also, shall we say, a very experienced driver – in that every time you saw them, he seemed to have a different machine! No jalopies, they’d often be spacious, if venerable Mercs, which ran and ran, though one did conk out right at the knackers yard gate!

Full of surprises they dazzled us with their most unlikely exploit, when they sold up and moved to Bexhill to go on a world tour, starting in the Indian sub-continent. We followed their  hair-raising adventures on his daily blog, with baited breath. Eventually they made a surprise re-appearance at the club dinner.  He even pioneered making a movie using still pictures of the faces he saw there.

Of late Mike’s passion was genealogy and he and Jo were about to launch a family history research company. They’d had cards printed.  He’d also become involved with the Sussex Festival. Mike touched so many of our lives and we will miss his quiet but significant presence.

Our thoughts and prayers are with Jo his loving companion in life, at this painful time.

If you have any messages or wish to share your memories of Mike, please do so below.

Thank you and thanks to Reg for the obituary.