The Making of Two Little Words 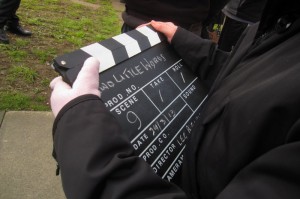 With no edition of Question Time on TV it was my nerves that kept me awake this particular Thursday night rather than my usual residual anger at the sanctimonious, ignorant bile spewed forth on said panel debate show. With the temperature having taken a noticeable drop I feared this would be prescient to more snow overnight. No matter how often I turned my body in my bed, I could not find a comfortable enough spot or position that would tempt my cognisant senses that shutting down for a few hours would be not just a great idea but a prudent one.

During this restless period my mind was buzzing with a paranoia I’m sure many a filmmaker has experienced the night before a shoot. Will the weather hold up? Will the cast show up? With they be good? Will they be lousy? What if we overrun so badly that we end up rushing crucial scenes or forget and fall short on others? What if the camera breaks down? What if the outdoor filming is hampered due to people trying to ruin the shots? What if a giant atomic fish headed chicken bodied hybrid beast that can shoot lasers from its eyes and lay toxic egg bombs were to rise from the ground and eviscerate Orpington to the point that it is completely uninhabitable? You can laugh but cameras do break you know!